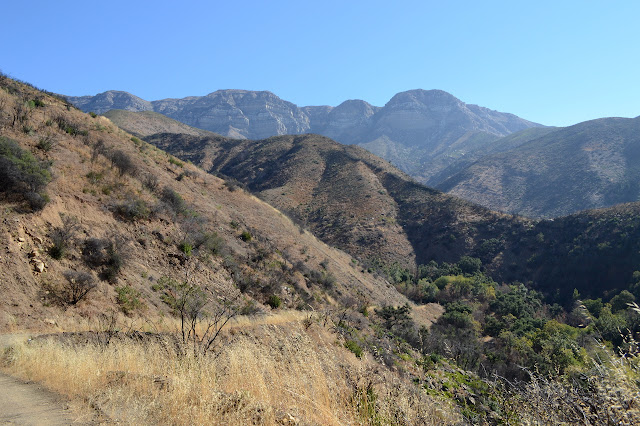 I actually took the time to ask if someone else wanted to hike and when the dust settled, we were three strong and had a shuttle hike going up Sisar Canyon (which Matt wanted to do) and down Horn Canyon (which I was more keen about) doing maintenance on all the geocaches along the way. The hike up is via road which makes for a very gentle climb, at least by our standards, nearly up to the top of the hills (AKA mountains) behind Ojai. Parking has changed at Sisar since I was last there. Previously, there was a nice lot after a not particularly nice bit of dirt road, but now the road has a gate because people wouldn't quit treating the adjacent private property like it was public property, and in rather abusive ways at that. Now they have ruined it for us all and there is much less parking further back. We left a car at the bottom of Horn, which has not changed much, then got around to Sisar in time to claim one of the few spots. Actually it is not that bad. We were only the second to take a spot as we started up the road.


The first thing I notice is that the road is now in quite good repair. It probably helps that it does not have all that public going over it in all weather anymore. Likely it got some maintenance when the fire was edging along toward this area. We are down under mature trees and there is evidence of fire, but only at low levels, at least for the most part. Then we pass into a flat that really burned and a thick layer of ash still covers the ground.

We get a break from the trees to see a couple of good looking swimming holes. The creeks seem to all be running now. Then it is on to a few more trees as we get more and more frequent evidence of burn.


Finally the road swings back and climbs into the hills where it is all burn everywhere. Bits of the hills with their southern aspect were protected by sparse but mature specimens of a few types of plants, but now it is wiped clean down to the roots. 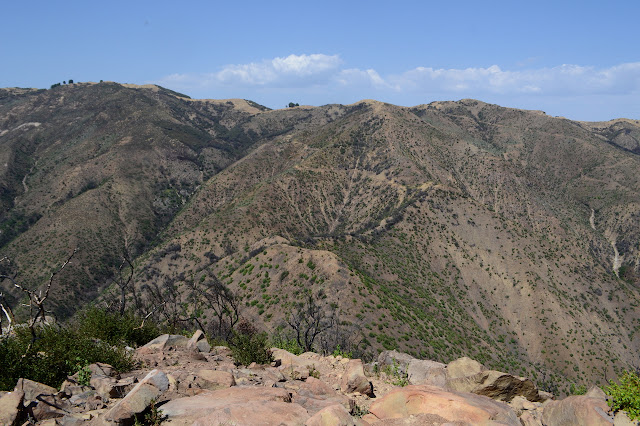 I feel like I have been avoiding the front country since the Thomas Fire except some brief looks early on. I see it on regular evening hikes with folks during the Wednesday conditioning hike and the Friday social hike, but I tend not to write up those hikes. Before leaving easy access to it, I decided to hike up Montecito Peak one last time. The usual approach via Cold Spring Trail is still closed, so the easiest entry to climb the peak is now Hot Springs Trail instead. The exclusion zone signs at the bottom have now vanished, so things are getting better. The very start of the trail looks the same, but things change just a step past that. New fencing is everywhere replacing what was washed out to sea. The creek flows down a canyon deeper and rockier and more open to the sun than before. The creek actually flows, which has not been seen this late in the summer in recent years. For one familiar, it all feels different. For someone who has not been here before, it probably would not seem so strange. Repairs have been made, at least on the edges.

From previous Friday hikes, I know the trail goes through, although there has been a little bit of work to make it do that and there is a spot in the middle that gets a little confusing. It just makes the best route hard to discern, it does not make it possible to get lost. Seeing it in the light is a bit different. There are views all over that previously were just a wall of vegetation.