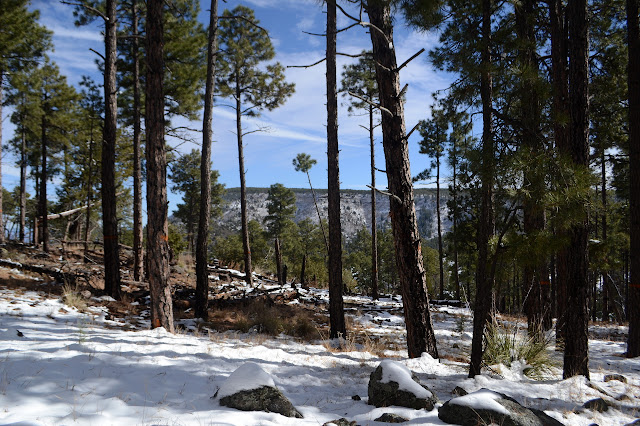 I am off to a later start than expected. I had looked at the icy road just past where the snow plow stopped and found a parking spot, but a chat with a pair of women had managed to dare me onward. They had not even questioned my manhood or anything. They were simply encouraging. It didn't help that they were playing with their own 4WD and crawling up the hill in front of me, but for all I know that just meant I was a little lower down when everything started to slide backward. Then the poor Forest Service employees dealt with a little more than they bargained for when simply trying to clean the toilets and I was parked even further away in the picnic area across the highway. This location has the advantage of not being along the side of a road clearly marked tow away zone even if my parking had been well off of it. A little extra walking is no problem, especially when compared to trying to direct a short trailer while sliding backwards on a curved, icy road.


The pavement ends for a nice, large graveled parking area with the aforesaid toilets. After this, dirt road continues on to the actual trailhead. This particular road is not recommended for low cars, but even in the wet mess that it is now, a few have made it. Most of those I see on the road are ATVs and judging by the bumper stickers and license plate holders of the trailers that brought them, they're a search and rescue crew out for an exercise in the first real snow of the season. They're definitely not working, at least not in the sense of bad news for someone.


The trail is getting a bit of use through the snow, so it is clear of the stuff and a little bit muddy. It isn't bad. The Powerline Trail, missing from the sign because it's too new, breaks off quickly and encourages any bicycles to go that way because Woodchute is heading for wilderness. I'm just generally gleeful for snowy vistas and not wet toes, even in my trail runners.


Trees give way to obstructed views of the huge valley to the east. Jerome, once a mining town and now America's biggest ghost town, is down there. The hills are more exposed and change to chaparral even as I climb slightly heading north. Wrapping the ridge on the west side, there are western hills to be seen hiding Prescott. Back to views east, the expanse is more vast. I can see snowy points in the distant haze. Humphreys won't be so easy to climb for a few months.


The trail is covered in snow as it wraps around the north side to the saddle with Woodchute Mountain. It is stamped down and not enough to make me feel the need for extra traction, but mostly because the slope is gentle. There seems to be an old road heading out, further around the mountain and down. The trail travels through and into the wilderness proper instead. It is muddy and steep as it climbs again, getting into more trees to shelter the white stuff from the glaring sun and more height so that it doesn't really need shelter.

I pass a group of a half dozen people and a dog who have stopped at a lookout point for snacks. They must have been the ones breaking trail through the snow. Past them, there's only a single pair of footprints with the dog, and those turn back quickly. As the trail stretches out on the flattening mountain under the blanket of snow, there are no more footprints to help mark the unfamiliar route. Still, it is a gentle dip where the snow is more likely to be melted to mark it. It is fascinating how the route can still be obvious, or at least indicated by clues, even under 4-6 inches of snow.


I'm heading out to a lookout point on the far side of the mountain before turning my attention to the high point. I think I see the trail split, but the one on the right that I want seems to vanish. Maybe it isn't real? I try the left, but it starts heading away and down. The snow is a little deeper as I head out cross country, but my feet are mostly staying dry with a little high stepping.


Now my attention can turn to the peak. I head back to the trail, arriving quite near where I split to the right and decided I was wrong. Maybe it is trail, but not used as much as the other so not so compacted and doesn't show as well. I follow my steps back for a bit before breaking off cross country again. Here the snow varies, sometimes a thick blanket, sometimes spotty on top of rocks. I step toe first as I have no idea what the details of where I'm stepping are. It lets my foot adjust to whatever is there better.

There are stumps, tall and short and all very old, to hint at the history that named this mountain. They gathered trees from here for the mining operations below. Somewhere there was probably a wood chute to help move them. But at the top, there is a tree that was left, a most magnificent alligator juniper.


There's supposed to be a benchmark somewhere up here set in 1902. Besides the mark, it says there's a large juniper as a reference mark. This one seems a rather good candidate, but the coordinates are a couple hundred feet away. I wander that way expecting little, and there it is. Nearby is a rather large juniper, but not quite like the one at the very top. As I look the tree over, I notice it has cut beams with cross beams nailed to them stuck up in its branches. This is definitely the "reference mark" for the benchmark.


There doesn't seem to be a triangle blaze or something like that on the tree, but somehow one of the cut branches is triangular. It's fun to find, but there's not much view from the top of this flat mountain. I head back to the trail again. My feet are starting to feel moist now and it'll be getting dark when I get down. The trail has a bit less snow on it now as I travel it. Mine are still the only footprints until I get back to the dog and person that went a little further than the rest of the group.

I poke around the side of the meadow and Powerline Trail a little as I go past, running into an unexpected quarter section corner. I still have a long walk to get back to the picnic area once I'm back to the trailhead with the register. It is indeed dimming a bit as I finish.