This is my second trip in this area. The first was last May.

Ah, let us go on a short little trip to stretch our legs. And let us rest up somewhere far from the hum of electrical lines overnight. Yes, that is a good idea. And thus it was decided that we should have a lazy weekend backpacking trip. At least on my side.

Apparently, the other side simply desired to put to use her equipment since she had never actually been backpacking before. There was also a demand that there not be a ranger at the campground watching TV or other horrors along the lines of being near people who were not, in fact, "roughing it". This demand was met. The second demand that there be as much water in the canyon as the pictures from May show was not met, as a simple comparison of some of these pictures will show. It turned out that there was still enough water so disappointment did not set in due to this unmet demand.

Being a rather short hike, we felt no need to start quickly. So one party drove up from San Diego after sleeping through an alarm, parking and campfire permit were obtained along the way, just a little out of the way, and the trail was arrived at without overshooting the rather unmarked road in the afternoon. Everyone involved was not particularly worried about this and everyone managed to neglect lunch but did manage to eat a banana.

We proceeded up the trail, quickly leaving the still used portion of the road behind, with many easy stream crossings. A quick marveling at the falls and further on. We got to Lazy Lucas, which had appeared to be someone's guerrilla addition to the sign at the bottom, but turned out to have a metal campfire ring and somewhat fancy sign. Guess the campfire permit was unneeded.

Declaring it soonish to be dark and better to cook in the light, besides neither had had lunch, we stopped for a bit to munch. I believe I managed to have actual flames inside the pot at the bottom of the rice after pumping on the fuel rose the flames too high. This seems to be the danger of a nearly full fuel can, the pumping is required often leading to uneven cooking.

With a bit of light left, we packed things back up and headed to the original destination for the night. It turned out to be a little more than a mile between Lazy Lucas and Tom Lucas, we got there a bit after dark. The moon was full, providing ample light to see the countryside when everything was open. The valley closed in for a while, requiring a lamp. Seeming too long along, it opened up again and the campground was a welcome sight. 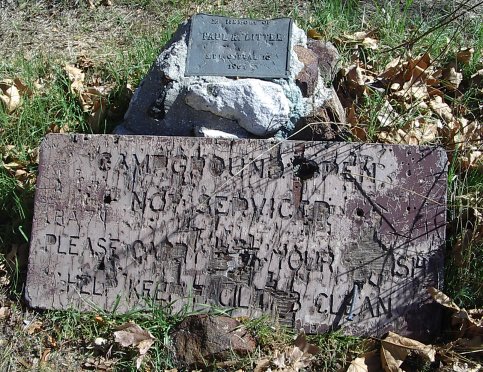 (The sign and a memorial to Paul Little at Tom Lucas campground. Once this was a car campground, or so we are told, but there is now no obvious evidence of a road although so many of the old roads are easily found.)

After a lazy morning, we got started again heading further up the valley. The creak was left soon after the campground and we started to climb a bit. Maybe it's time to go ahead a snap a photo...