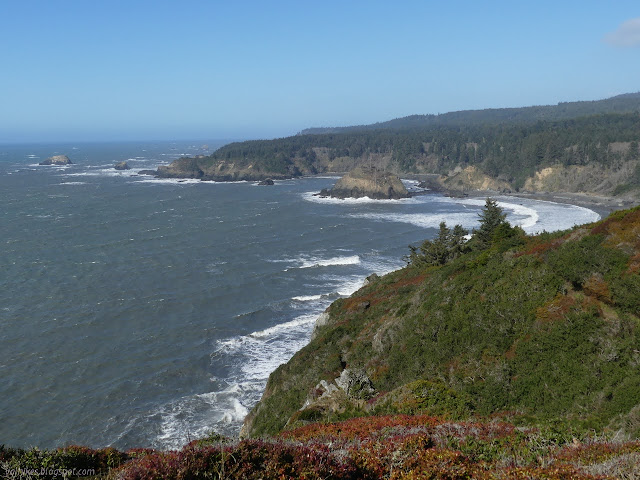 
I decided I would have some small adventures on some Trinidad Coastal Land Trust properties, but first another round at Trinidad Head. My first visit was just 24 days after the addition of five mainland units including the head. I actually managed to visit the monument twice in the first month of these additions without knowing it. For the head, the monument is actually just the southern tip occupied by the lighthouse and the trail only barely enters its area at a viewing platform, so the visit is rather technical. I'll have to try to better it some first Saturday of the month when the gate is supposed to open to allow visits to the actual lighthouse. Just over four years later, I could still not know there is a national monument here. The only mention of it seems to be in the Redwood EdVentures Quest for Trinity Head. (Incidentally, there is also a Junior Ranger Program and an information brochure aimed at adults.) I parked in the large, dirt lot on the isthmus, which is actually part of Trinidad State Beach, and crossed to the green southeast corner where steps and a sign mark the start of the trail.

At the top, I diverted to overlook the east side where the Little Head dramatically overlooks the harbor before starting up. I also wanted a spot out of the wind to try to get into clothing that better protects from that sort of weather. I found a sign at the junction encouraging one way travel. Fortunately, the direction matches the one desired by the quest because it might be rather hard to follow it in reverse. It quickly directs to the islands and rocks visible off the state beach. The majority of the California Coastal National Monument are the combined area of every rock that breaks the surface of the ocean at mean high tide standing within twelve nautical miles of the coast that happens to be owned and controlled by the federal government. Oh, and one of the larger ones in view, Pewetole Island, happens to have a blow hole. The tide has to be at the right level and it was not.

The very green headland actually offers quite a bit of protection from the wind where the trees and shrubs haven't been cut away for a view point. There's quite a lot of pruning that must go into keeping the trail open and comfortable for walking.

The quest said to ignore the first spur along the way, but I wandered down it to the bench at the end. People have tried to push further, but that is where it ends.

The quest does encourage going out along the second spur trail, which travels up to a minor high point. It's quite a point, but the wind was making it hard to stand. There's a lot of edge to stay back from when one is feeling just a bit unsteady in the gale. 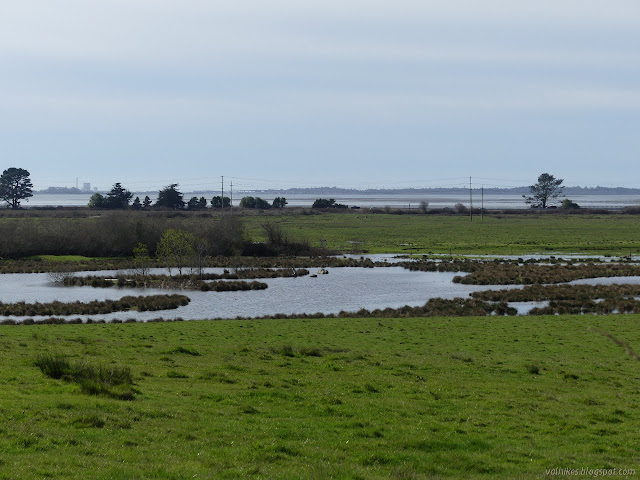 
There's a number of paths about, including some along the side of Old Arcata Road. One side is the city's wildlife area, but the other does happen to be the major artery alternative to US-101, particularly for anyone who lives somewhere between Arcata and Eureka. It's a bit of a busy street, but the paths are set back from the road.


The paths do not actually go into the wildlife area. That entry is by permit only. Cows get to go there, but not the general public. There are some restoration efforts. I saw that part of Jacoby Creek has been returned to its original channel. Besides the cows, fish and birds also get to enjoy the area, which is the main point.


The path runs out when it hits Bayside. Annoyingly, there's not sidewalks through the town and I don't recall there being paths on the far side. I turned around. I had not crossed Jacoby Creek, but there are a couple more coming down the hills. 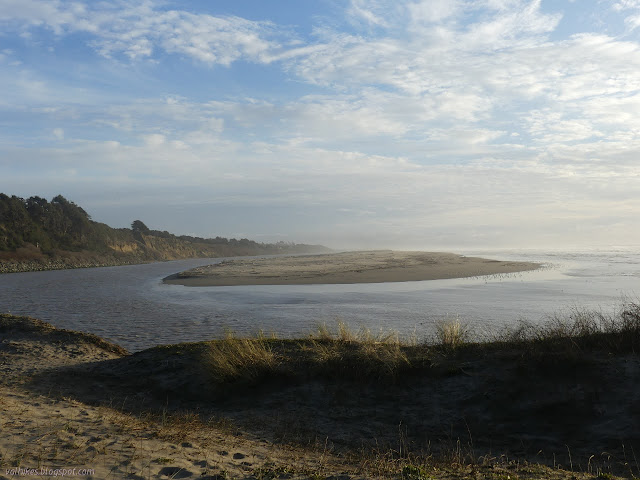 
Back to the Hammond Trail on the end of Letz Road from (almost) where I ended the week before. Letz Road represents a road walk portion of the trail. Since it only goes to a few houses above the cliffs, it does not have a great amount of use. The trail parking is found at the north end by an information sign. I came equipped with an already downloaded Redwood EdVenture Quest brochure for the new bike quest.

I walked into the trees. A trail branches quickly to the left for a lookout point among them. A little further down is a lookout point accessed from the freeway. It was parked up from end to end when I arrived and I'd already seen about six people using the trail. There's a bit more visibility by the parking since there's a lot less tree.


I headed down the hill making the stops indicated by the quest brochure. Answering the questions for it served to emphasize that Strawberry Rock, seen in the distance, is an old sea stack as described on one of the signs along the way. I'd really like to hike to Strawberry Rock! At the bottom, I passed by grassy sand dunes with willows collecting in the dips. 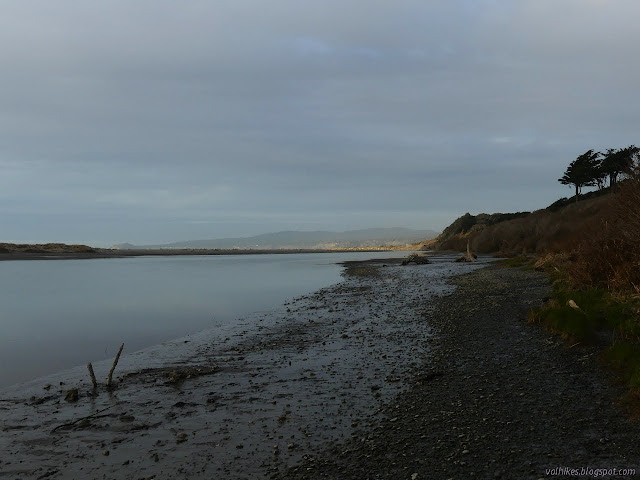 
I headed out to the Hammond Trail to try out one of the new Redwood Edventures bike Quests. I didn't come out with my bike or anything. That went away when I couldn't find the space to keep it. It is perfectly alright to walk it or even ride it on a horse, as it happens. It was really an excuse to come out to the Mad River Bluffs once more before crossing Hiller Park to the start, then once more after finishing. I quite like the bluff.


I proceeded through the bluff area and across Hiller Park to the start of the quest along the Hammond Trail. I was only accosted by one dog in the park where dogs are supposed to be "securely leashed" and virtually none are, but that dog really made it count. She jumped up on my and tried to push me over from the back, from the sides, from the front over and over and over again. The owners shouted at him, but made no move to stop 50 pounds of mature pitbull from trying to push over a complete stranger for 5 minutes, including trying to push this stranger back when leaving the area. The dog seemed more encouraged than discouraged by the shouting. Are they all called Peanut or was this the same one as before? Anyway, other than getting accosted by dogs called Peanut, Hiller is a nice park.

Once on the bike path, I turned north. The quest starts at the end of the parking lot. I expected to see something about it in the nearly empty kiosk, at least a QR code for starting it since these new bike ones have that sort of thing, but there was nothing. My data connection seemed to be halfway working this time, but I already had the quest downloaded. I was ready to go once I had the right Hammond Trail based bike quest loaded up.

Hammond Trail follows the path of the Hammond Railroad. Past the park, it passes between houses, but one doesn't know it without trying some of the informal use trails up the side of the 10 foot berm on either side. The berm is wide and topped with trees making it a tall green corridor up until it crosses a street. The quest comments that the stately homes with their stately guest houses visible are called "the castles" before returning to things more to do with nature.

Trip reports full of pictures and maps, a little sightseeing, sketches in the wild, and a few MYOG projects can be found here.
Take a moment.
The first post of each year is a table of contents for that year, for an index of everything try the Master List of Hikes.
My climbed Sierra Club listed peaks

Valerie Norton
Quantum mechanic and artist. Should be looking for stability, but always searching out new trails instead.