We wanted something on the way to dinner down the 605 a bit and short enough to start well after lunch. Sawpit Canyon (on the map), but Morovia Canyon by the signs, looked like a good one except that they were going to close the gate at 5PM and we'd still be on the trail then. No problem since parking outside of the gate is easy too.

Getting there just involves getting off the freeway at Myrtle and turning north through picturesque old town Monrovia. Turn right onto Foothill and then left onto Canyon Blvd. We parked on the street. Most of the way up to the park there was a footpath beside Canyon Blvd. The trail starts just past the pay station. Since it's run by the city, the National Forest Service permit doesn't get you in.
Going up we pondered the loudness of the water sound and whether it might really be water in spite of the dry winter. The wind didn't seem to be blowing that hard. It was water; according to the handout the city had, it is spring fed.

We started our wildlife viewing right at the start of the trail. A deer was pondering where to go and eventually went down the side of the hill toward the road. There it found a dog to be chased by, so it probably wasn't a very good choice of where to go. We turned the other way.

As we climbed higher on the trail, a huge dam came into view. This dam holds back the water in Sawpit Canyon, the larger canyon. The trail goes off to the left into a smaller canyon explaining the difference of opinion as to what this area is called. The road goes up to the dam after the parking lots.

Along the trail we spotted a great big fuzzy red velvet ant (which is apparently a solitary and wingless wasp) and some lush poison oak. We were warned that there was a rattlesnake down by the river but failed to find either snake or anything river-like. 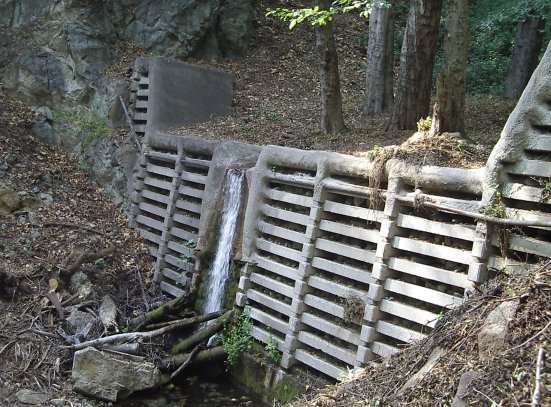