We hiked up to Echo Mountain to watch the fireworks.  In this case, "we" is a group of 12 people I mostly don't know who are mostly in Abbie's boyfriend's lab.  We met around 4:30PM to head up the trail, probably getting started around 5PM.  Today has been hot and humid and we were quite hot going up.  Eventually we were stopping for every bit of shade we could find.  We ended up one of the first groups up of those aiming to see fireworks.  Most people came as it was getting dark, but we all got to watch the sunset and look around the place in the light. 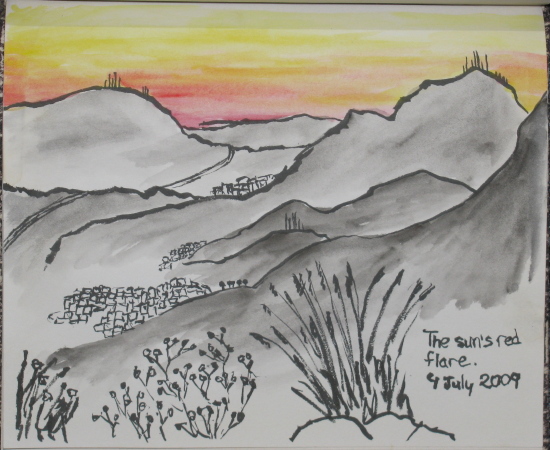 As the day was humid, visibility wasn't great.  This manifested itself mostly in a layer of dingy air over the cities, but it didn't go up very high.  The valleys were quite invisible, but mountains sticking up out of it from time to time seemed perfectly clear.  As the sun faded and the lights went on the distant lights became just a uniform smearing of bright.  Fireworks popped up everywhere.  For the most part they were actually hard to see nearby because the city lights were just as bright.  Some shows were backed by nearby mountains so easy to see.  The Rose Bowl show was not bad to see, and was the main object of attention for the crowd of people also on the mountain top.  More distant shows were easier to see because they also were less likely to seem set against ground lighting.  To some extent it was a strange experience in that we could hear the booms but they were all so far away that the firework that generated the boom was only smoke by the time it could be heard.

I rather liked the fireworks over the random spots that were in the area so distant the lights had become a uniform blur from the heavy air.  The largest of these were the only ones we could see.  They popped up sharp in that field without clarity rising far above the indistinguishable ground.