November was spent very far away from home.  I brought a new watercolor book for the trip.

By Valerie Norton at November 30, 2010 No comments: Links to this post
Email ThisBlogThis!Share to TwitterShare to FacebookShare to Pinterest
Labels: sketches

I went to India, as one does. One friend was having a wedding ceremony there and another had been demanding I should go at least once. Those brought me to Bangalore and Delhi and there were a few trips from each, but can you say you've been in India if you haven't been to the mountains? I had to find a way. Also, I had some encouragement from my friend in Bangalore who likes to run off to the mountains from time to time. She was trying to get us a set trip with a tour group, but in the end couldn't go herself. There was a couple going up on the perfect trip for me who were happy to have others join their trip, so I got to be a part of their tour. It is quite a different mode of travel than I am used to for a multi day walk.

The trip started in Rishikesh and I was in Delhi, so I got myself a 2nd class ticket and boarded the sleeper train up to Haridwar. I wasn't sure how well I would sleep in such a setup or even what exactly the setup was. There is about a car of 1st class, two or three cars of 2nd class, then a long line of 3rd class cars vanishing down the track. I had a top bunk and a pillow and blanket were provided with the mattress. Apparently the procedure was basically stow the luggage under the bottom bunk, show my ticket to the ticket taker, then stretch out to sleep. I set the phone to when I was supposed to get in and stretched out. I actually slept quite well as the car rattled along the tracks. We were pulling into a stop a couple stops away when the alarm went off and it was still dark. One of my neighbors said where we were and how many stops to Haridwar. I still hadn't seen the signs saying Haridwar when I got off a half hour late, but it certainly looked reasonable as the large station. Perhaps I am too trusting, but this time I found a taxi driver waiting for me as was supposed to be. I rode into Rishikesh in an Ambassador, the mainstay of Indian vehicles for many years and my only ride in one.

It was still a few hours early when I got to Red Chille Adventures headquarters and internet cafe, which has a great view, but I hadn't had breakfast or the morning ablations. When we started, we were a group of three. The end of November is considered the late end of the season, so no one else had joined up. We started up the winding Himalaya roads, which were quite fine at first. Good pavement, except at a ford, and people tended to their side of the road, except during the plentiful passing. But then there started to be one lane areas, where a bit of road had dropped down the side of a cliff. At least once the whole road had dropped down the cliff and the cars were going along a plowed out bit of rock. Roadwork is constant and every few miles and largely hand done. I saw one tractor and a lot of two person shovels. Going around every blind corner, there was an unabashed beep to make sure the other side knew we were coming. We stopped briefly across the river from Deoprayag where steps allowed access to one of the more holy areas of the river, the confluence where the Ganges is born.

After wandering for hours around Taj Mahal, I walked over to Agra Fort, because it wasn't that far. Besides, the purely normal along the way would likely contain something new to me. 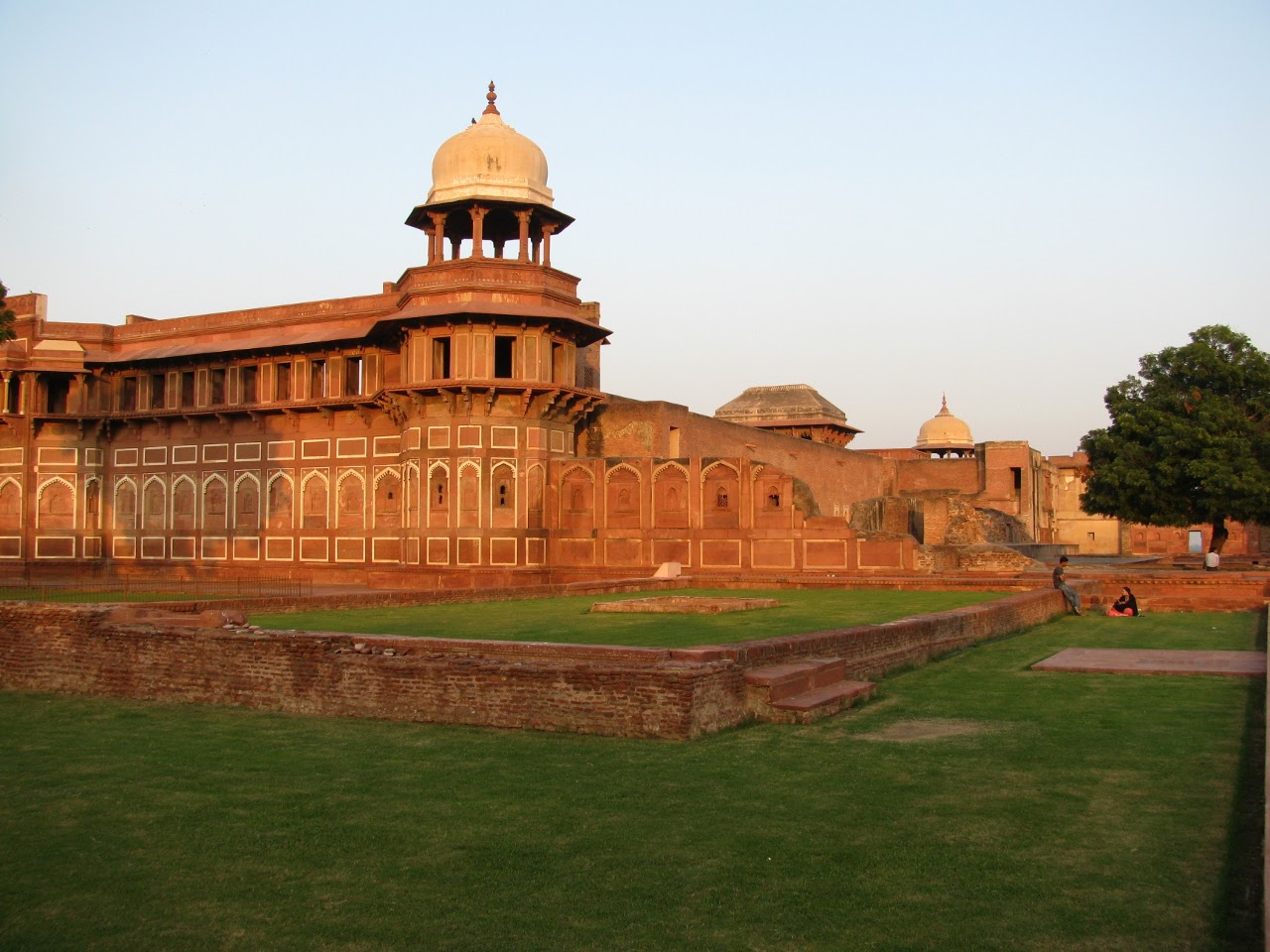 The fort is impressive just to approach. Walls are built of brick and covered over in red sandstone that is quite striking. So far removed from thinking of the strategies of defending a piece of land, the many layers for defending armies to guard within, the slits to shoot from, the way the lowest wall is shaped to make repelling climbers easier all looks artistic. It all looks quite formidable, although it seems to have changed hands quite a few times. 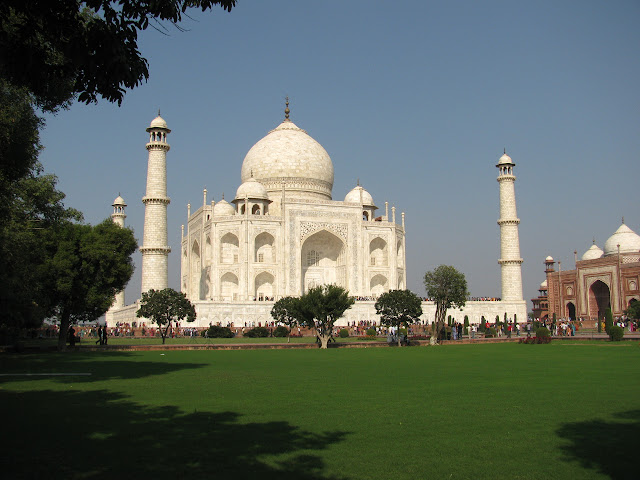 It seems to be the in thing to take a day trip to Agra and see a few of the sights. There are a number of trains leaving Dehli in the morning and arriving back in the evening. While the majority of most trains seem to be 3rd class, the one I was on had none and even served a breakfast on the way out and some supper on the way back. What luxury, but without the antics of 3rd class, how can it be a train in India? First stop for the day was the Taj Mahal. They all say you must go. The tuk-tuk driver of course offered to be my dedicated driver for the day for a flat fee, but I dislike such arrangements. Tickets are expensive for foreigners in comparison to citizens, but as Shachi points out we do not pay the national taxes that also go to keeping the place up. My camera did not also need its own ticket, an odd and all too common phenomenon in other places. Video cameras were forbidden. I almost failed at not pointing out that every still digital camera is capable of video these days. For my more expensive ticket, I also got a box of items they thought I might need. There are booties to put over my shoes for entering the mausoleum (citizens must take their shoes off) and a bottle of water. Otherwise, food and drink were not permitted inside. I decided not to point out the dried fruit in my bag. If I do not pull it out and eat it, it is as good as not there, right? They also did not allow menstruating women, which is quite none of their business. Without much ado, I got my ticket and shuffled into the forecourt.