By Valerie Norton at February 28, 2015 3 comments: Links to this post
Email ThisBlogThis!Share to TwitterShare to FacebookShare to Pinterest
Labels: sketches

(Day 2 of 2) There is a light frost to greet us in the morning, but it burns off quickly. The snow on the higher mountains is already gone. The gale force winds that make this Hurricane Deck never materialized. Yesterday was all sorts of pleasant and it looks like today will be, too.


We make our way back down the peak to the trail. This side is a much shorter walk than the way up the east side. The trail does not drop much before taking us up the second peak that could be the highest. At the top, we look back and still cannot decide which is taller. USGS says it is the wider eastern peak we stayed on. My GPS seems to opine that it is the western one with the trail over it, but the barometer can change its mind easily.

(Day 1 of 2) Mark and I made our way to Nira with a simple-minded goal: camp at the very top. We are starting a day late because a small storm came through yesterday and the cool day after the storm seemed better than the rain on our heads. The creek is dry too often lately, so we are already enjoying ourselves just to get out and hear it running. We will not be near the water long, so we are carrying all our water anyway. Lifting my pack with 7 liters, I am wondering what important thing I left out because it feels too light. We set off toward Lost Valley into a world that is so delightfully wet.


Little Pine Mountain is on the Sierra Club's "Great Lower Peaks", a list of peaks that do not reach the height of 5000 feet, but are nonetheless notable. The mountain has multiple peaks that ring Happy Hollow and the peak height listed indicates that they consider a shorter grassy one to be the peak. I have been there, but today I want to go to the highest peak, a chaparral covered mound east of Happy Hollow. This one is actually labeled as the mountain on the map. It is a fee free three day weekend, so there is no troll guarding the ford. Upper Oso is full of people making breakfast but there are only three cars in the lot by the gated road. The little gate is open, so there will be motorcycles. The air is cold enough to make my elbows hurt, but that will not last long.

The creek is flowing below, but crossing it will but just a quick step. The creek bed seems to have filled in with a large, black silt. The road section passes quickly. The trail is marked with a sign and a register. The register is full and someone has left the lid up. Flowers are all along the side. An old washout that has become a crossing proves that the creek is a quick and easy crossing as I head up to Nineteen Oaks.


It looks like the heat may be breaking a little as we continue through a season that is hard to call "winter", and it may be a good day to take in a short hike in Gaviota. Everyone else seems to think so too, as cars are parked around the entire lot leaving little space for new arrivals. A grandpa with a couple youngsters is finishing as I start. Behind them, a couple that look like they have been soaking in the hot spring are wandering down greeting the world with smiles. At the junction, a family is deciding which way to go. I turn up Trespass Trail, and the crowd thins out. The hills are still green from the rains and the flowers are starting to burst.


At the Holiday Hooplah for the Hundred Peaks Section, we were asked to tell a truth with our name in introductions. I said that I was planning on hiking up the delisted Ortega Peak. It may be a lame truth, but it fit in with the rest of them quite well. There is no Ortega Peak, really, but a benchmark labeled "ORTEGA" is shown on a high point east of Ortega Hill on the 1942 Wheeler Springs map. Their name is based on this benchmark. I had been meaning to go to "the real Ortega benchmark" for quite some time, but was finally reaching the tipping point to actually doing it. ("Real" distinguishes it from the "ORTEGA" next to the road on the 1995 map.) The most sensible route is to start at Cherry Creek Road, a popular illegal target shooting area and the reason the peak was delisted. In particular, it was an incident in which someone ducked down for a good squat just in time for a bullet to whizz overhead. (I was told this in the first person.) For me, this means try to hit it on a weekday. In fact, try to hit it one of those most unpopular weekdays that start with a "T". My experience with the road when hitting it at the top of Upper North Fork Matilija made me want to be sure it was dry. The trouble is, just as I was ready to go, the rain would come up and wet it down making me put the trip off for another week. With rain again threatening, I decided to go ahead and brave a Friday, the worst of the weekdays for avoiding target shooters. I planned on coming out again after dark when they would be gone again if they come. Well, except the worst ones, the drunk ones. It is a gamble.

I arrive at the gate to Cherry Creek to find no cars at all. So far, so good. I have also realized halfway through the drive that the camera next to the pack never got into the car. I thought one of the smaller Canons might be in a bag I did grab, but it is not. The only camera I have is one I have never tried on a cheap 7" tablet. It is forward facing, so I cannot see what I am doing even if I can see the screen in the sunlight. I expect dreadful things from it and it surpasses my expectations most extraordinarily. This does not matter. The hike is the important thing. I take off with a nagging feeling of forgetting something, loop back to get my poles, and take off again.


Having finished the trail work, but finding I have a whole afternoon left and a chunk of trail I still have not gone along, I drop off my tools, have a root beer, then head back out along the trail. The first mile is now very familiar and goes by quickly. It seems like there are fewer treacherous muddy spots this time. Memory really is a funny thing. Turning right to leave the spur to the camp, I continue downward. It is only a few hundred feet finishing with a short climb up the other side of the canyon to get to the next junction where the connector ends in Deal Trail.


Just like last year, there is trail work on Deal Trail for Super Bowl Sunday this year. I signed up for it before the Pothole Trail work, but decided I could do both. A few others did as well. This time, the work will be done on the spur trail to a campsite left off of the most recent forest map. We noted it on the way past last year, but kept on striding to the wilderness. For the work today, we all meet at the Deal Connector at 8:30AM to pick up tools and hard hats and go over the Job Hazard Analysis. Mostly, it is brushing, but we have some tread work and chain saws will be in action as we are outside the wilderness. We have stock support and they are each decked out in pendants and paint, one for each team in the game. 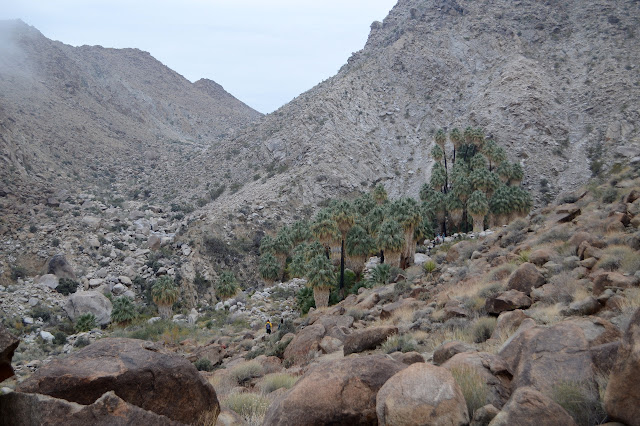