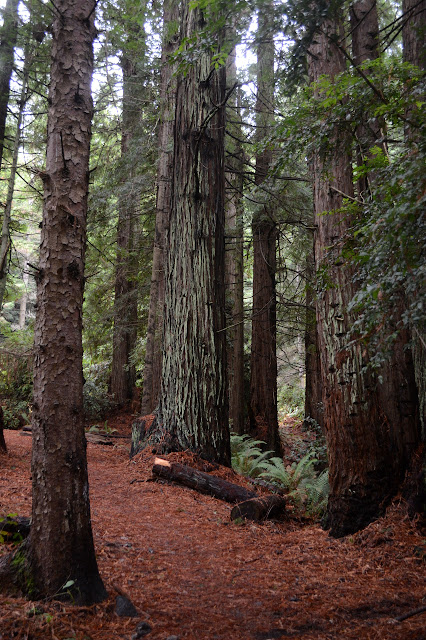 Out for a quick loop hike while there is clear air and patches of sun. Oh, and the threat of rain. In fact, it is actually sprinkling a little as I start, but I have my rain coat and the trees will probably put an end to most the thin drops. Sure, they'll replace them with big drips, but it takes a lot of thin drops to make a big drip.

I know there are some spots up high to look out to Humboldt Bay, so power up the road to the top so that the weather has the least amount of time to fill in the air with rain or mist. Of course, the weather doesn't need more than a few minutes and it takes me longer to get to the top. 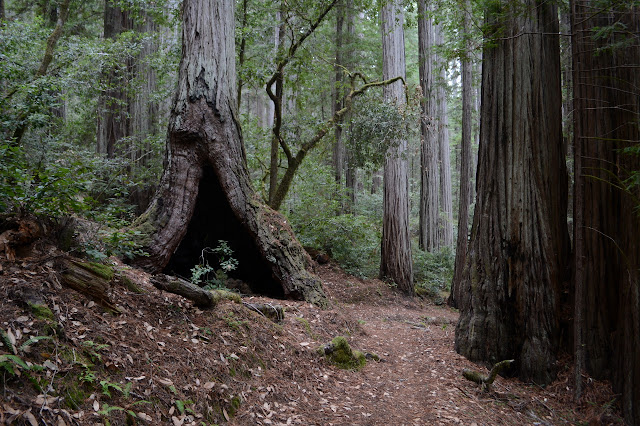 I was wanting to do some redwoods "properly" meaning, well, wander beneath them for a while trying to look up far enough to see the top. Probably. I'm not really sure. But redwoods. Properly. I noticed I could find some and get a peak as well and went for it. I also noted that it is a bit of a long hike and I would want to use all the light of this short day and started off very early. The route up the mountain starts with a fire road signed as "lookout". The main parking at the bottom of the road is all signed no parking from sunset to 8 AM making it illegal for another 1.5 hours and I don't want the pressure of getting down before sunset (after all, there is still some light available after sunset) so continued on to something unsigned next to the gate. It is still quite dark as I park and a little lighter once my shoes are on, but still too dark for the camera to autofocus on the gate for a picture of that start. Light enough to walk without getting out the lamp.


The trail is the fire road and reputed to have nearly no views until the top. The day is gearing up for a storm tomorrow, so I rather expect no views even when I get there. That doesn't matter, the point is the trees. The view in the middle is a bonus if it comes. For now, I can see the ghost of some hills through the trees in a few places. The dawn is giving the sky the faintest rust color but otherwise the only indication of the rising sun is how quickly everything is getting brighter.


The road splits and my instinct is to go on the one that goes up, but it is signed to help save me from that error. The right fork finds its way up Squaw Creek Ridge and maybe more, but not to the peak. The left fork is signed Grasshopper Multiuse Trail, so that is where I go. It stays rather flat and even drops a little, but is going to the peak. I must just have a little faith. Or a map to show that I'm just going around the side of one bump to get at the larger one further away. Just one reason it is nice to have a map.


I am suddenly aware of the sound of water flowing. It takes a little longer to actually spot some water, and then the road crosses a couple courses. A trough is provided next to one, although the hosing getting water into it needs some work. It is still nearly half full and the next few months will probably keep it full enough. 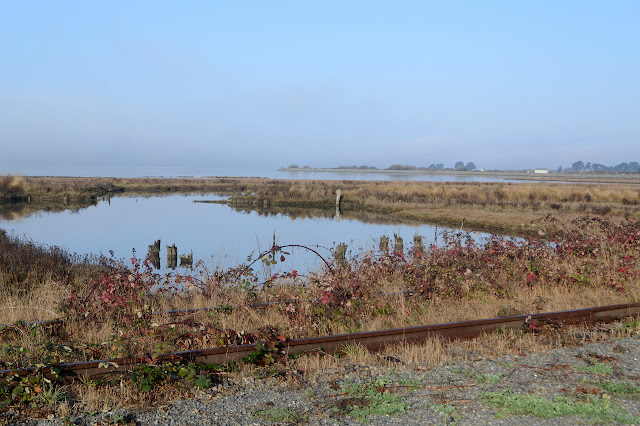 I wandered down to the marsh again in the morning to see it in another light, although went to a little different spot just south of the main marsh area. My entry to the trail is a little opportunistic, but obviously well used. The trail is the new bike path and paved, but so it goes. Unfortunately, the different light is actually a heavily filtered one. It is a bit foggy this morning.


A bit of the land has been ground up with some machine, but not for very long. Further along it is all signed "wildlife sanctuary". Not a lot of wildlife is visible, but there is something in the distance that looks like a plastic bag on a stick. Or an egret. Actually, they are definitely egrets as the walk a little sometimes. Mostly, they seem to be standing about waiting for something. 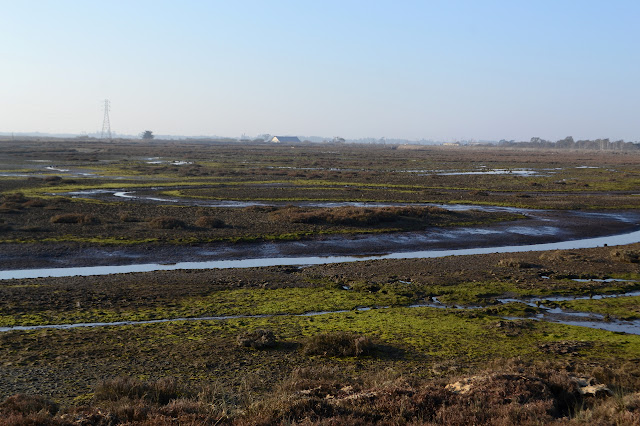 I'd kept meaning to visit the marsh area between wandering dunes and beaches and big trees, but never quite made it. Admittedly, there are tidal flats and brackish pools in other areas, so I did get a little bit of the marsh but with a fair bit fewer people hanging around. Here, I've barely entered before a large and apparently organized group passes by. I do wonder where they parked because I only found an area with three spots. There is a little bit of education out here too. Signs tell about the area. The first one I find tells about river otters that can be found around here, but are rare to see and a little hard to spot. It gives a few tips for finding them.

A short wander down one random path shows that they won't tell me a path goes nowhere I can go without a key until I get around the corner to see that for myself. I try again and quickly find the large parking area I had missed on the way by on the road. The other side is an overgrown pond with only a few breaks in the vegetation to see out over the water. I can't help noticing that there are a couple blackberries wound in it all and they are already sporting a few ripe fruits.


Past the parking lot, I finally find my way away from the road. Well, somewhat away from the road. There is also the bike path and another road passing through the marsh area. A dirt lot only has a few users as I pass. Meanwhile, the nature of the surroundings have changed to more open and marshy and a little more like what I was expecting. 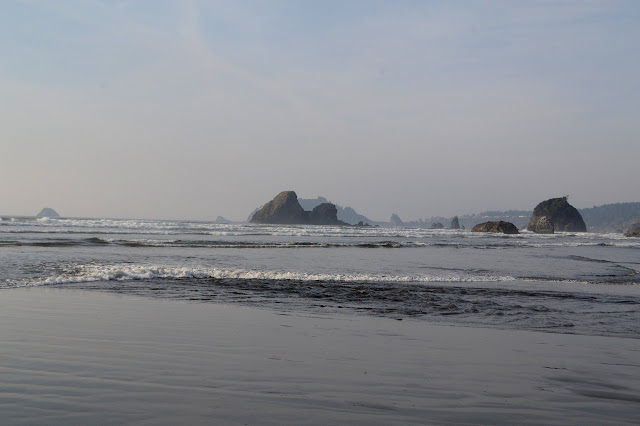 Back in Arcata, the obvious hikes are up under big trees or out in the dunes. Little River is a pretty little spot when zooming past it on the freeway, so I decided to go for some beach and/or dunes hiking to finish up there from Clam Beach. Perhaps now that I have learned to stop fighting the gentle downhills so much, I might be able to get across the really flat stuff without much pain too. Anyway, it is just 2 miles or so and I have managed that much flat before. There are a few lots for Clam Beach. The first one is at the corner just short of the campground and has a sign that is easy to miss. The lot is unpaved and seems to have been the staging ground for an old road on the dunes once.


A very well established trail of gravel passes by another sign warning me to take my valuables with me. A bit of boardwalk crosses Strawberry Creek and from there the most obvious trail powers its way down to the beach. There should be something somewhere, but I miss it. It will be the beach then.


This is all tsunami zone and signs marked the entry into it to make sure everyone is aware. More signs warn of rouge waves claiming I should never turn my back on the ocean. Right now, it is a rather misty ocean. I can just make out the headlands at Trinidad. The beach feels so vast that it seems odd to think one of those waves might come up it, but then rouge waves are a lot bigger than the ones generally lapping at the sand and slowly coming higher with the rising tide.

In the neighborhood again, so I thought I'd check on if the Arcata Ridge Trail is complete yet. The current map shows that the city owns the land, but no trail has been constructed. That was last updated in June, so there could be something more now. Anyway, it'll be partly built before it is fully built and they probably won't be updating the map for that. I have hiked the area before. (This is only the part marked with a black line in the previous hike.) The track for this hike is here, if you would like a map for this short hike. Since it is a short hike, I decided to see how Timmy would do on it and brought him.


Timmy is learning this new walking trails trick at the age of 19. He has gotten to be a lot less timid over the years, but meeting people on trail is still not something he handles well. Luckily, he is easy to hold and he can handle bicycles and runners when he is in my arms. Most of the route has a choice of road or trail to follow up and we mostly took the trail. Usually this would be the short route but in this case it is the long way. But that is fine, because we are experimenting. He walks along trails pretty well. He doesn't do switchbacks so well. He tries to continue on his way instead of making the turn, but with a few hints he's off again in the right direction. He also tends to want to turn back after a certain distance. His usual exploration is to go out a bit and come back, getting to really know that area before going out further. This point to point thing is a little unnatural for him. We stopped halfway up for food and water and he only drank. He walked most of the mile or so up were we found, well, not a lot.


The same sign still marks the future home of the ridge trail, but there is no ridge trail. There is not even a bit of a cut line for where it will be built more elaborately. It definitely does not yet go through. The map does show trail built on the other side up to the road, so I'll have to have a look at the other side at some point. It is possible to get up to the road by continuing along the abandoned road and some use trails, but it gets a little iffy (or it did a little over a year ago) toward the end. We stopped again for food and water and he ate a bit this time. I did too.