It turns out that there is hiking in Hong Kong, which is a bit more than a city of skyscrapers. I went out to Lamma Island, which is served by two public ferries and has a (paved) trail from one port to the other plus a few other routes. When I got to the ferry terminal, both were leaving within 5 minutes of each other, so I got on the one that came less frequently which came a little later although it was supposed to be earlier. Soon enough, I was on the island at Sok Kwu Wan. There's sea food restaurants along the path into the community as well as a public bathroom (including a western style stall and pictures on the doors to indicate which one) and a temple and ...


It was around lunch as I arrived, so the restaurants had people out trying to pull the new arrivals in. The seafood on offer could be found in tanks outside while passing by. I passed it by and came to a temple and a helpful sign showing the local walking routes. Signs generally contain English, so it's really very easy to navigate. I chose to head up the hill toward another temple before starting to cross the island.


Coming to the top of the hill, the view opens up with shorter vegetation on the south side of the slope. Rocks are exposed here and there and the ocean extends beyond.

I didn't have enough time to go around the south of the island. I really should have. And although the maps provided here and there were nice, it would have been nice to have my own in hand since some weren't so good. Anyway, I had to turn back to continue along across the island.


After walking through town, I started crossing to the other harbor. The trail curves around the bay a little thing proceeds past a couple caves. There aren't natural caves, though, these were dug by Japanese soldiers during WWII.


The trail heads inland via a couple different routes that eventually come to the same place. It passes by a few houses and gardens before climbing to go along somewhat the ridge of the island. 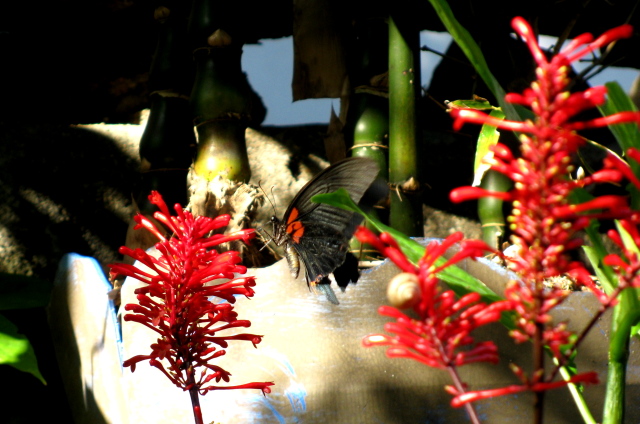 The path crossing the island is very gentle and has a number of short side paths. I took a few gaining views of rocky coastline and small beaches and the big ships on the horizon. I didn't have time to take one long excursion I wanted to in the direction of a few modern windmills. Soon I came in sight of the Lamma power station and Yung Shue Wan. I walked around the village which has a number of shops, a large beach, an organic garden, and the port.

And after looking around, I climbed onto the ferry for an easy ride back to the city.