Following the walk to the east, I quite logically chose to walk to the west. But first, it was raining in the morning, so I didn't actually start for a while. Starting at the lighthouse again, I went through the park and onto the path along the top of the cliffs. On the far side of the park, there is an informative sign showing such things as where a WWII gun bunker used to be in the area.


I followed the path down the side of the cliff which brings one to the edge of the city by the beach. Cromer was built where there was a low spot so the beach was easily accessed and this is still the center of town, or more specifically, just the other side of the church is the town center. The pier is off to the side of the low spot and the local lifeboat launches from the end of it. (The lifeboat is like a volunteer fire department except that they go out to help distressed ships rather than put out fires.) I continued on the edge of the city, then followed a path down the side of the cliff to the pier and out onto it.


After poking my head into the boat house for the lifeboat, which has a little public viewing area for the boat and plaques listing the various rescues and help rendered, I walked around the pier a little more and back to land. I turned along what would be the boardwalk except it was made of cement and passed by the various closed shops along it. This is much more developed than the other boardwalks, having not just shops but also a water slide and carnival rides. At the far end, there were more closed up sheds that were the only feature of the other boardwalks.


At the end of the boardwalk, I was dumped onto the beach again. The beach on this side is much more full of rocks. I could either walk along the sandy and soft areas up near the cliffs or down the beach a bit where large stones made the footing uneven and slow. As long as the sand didn't shift too much while I walked, that was okay, but if it started moving around a few inches, I wandered over to the stony areas. Some places had strips of small stones as well, but these were particularly hard to walk on. I continued up the beach which did not have many of the walls along with quite a lot of beach walkers, some with their shopping in tow.

Soon enough, more walls started up again. At first I traveled below them, but the rocks got particularly odd and what there was of tide pools were growing in width, so I headed up to the cliff side. I continued along them. 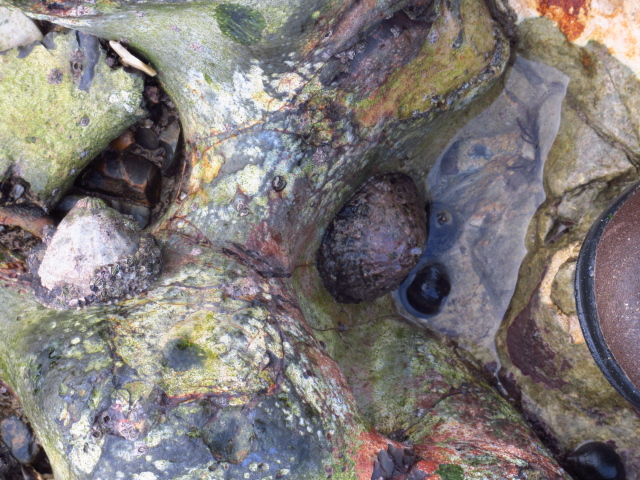 Eventually, there is a somewhat larger community on the cliffs. The density of people went up substantially from the areas between. Lots of dogs playing on the beach with the people and even one kite flying. Another batch of colorful sheds sit upon the boardwalk. I drew and nibbled and turned back. By this time, I had been threatened with a few raindrops from above to try to scare me into turning back, but it was the late time that made me go.


Coming to a road back up the cliff side, I decided to try for the national walking trail that was supposed to be on this side of Cromer along the cliffs. I climbed up onto the cliffs, but signs there again were dire about walking along the cliff and noted that the public right of way had eroded away to nothing. Still, there was a trail that proceeded along the side of the cliffs between the planting of the nearby farm and the drop off. I followed this. It came to a caravan park, which still had some space along the side of the cliff, but the trail reduced drastically. Soon, there was no way through, and I had to return the way I had come all the way back to the original spot I had climbed onto the cliff side.

And so I walked back to Cromer in the deepening gloom of twilight with occasional threats of rain drops along the beach. I spotted some more digging and then a couple figures making their way back to a route up the cliffs with buckets and diggers. Then there were the lights of Cromer.


I followed the boardwalk along as far as it went, past the main ramp down from the city to the beach and past the Royal Navy museum and past the boats in their trailers with tractors on the front of them to haul them down to the water and past another set of sheds. At the end of the boardwalk where a ramp goes down, a trail also switchbacks up to the main trail along the cliff top. I followed this up since I knew there were no lights on the stairs up to the lighthouse so I might miss them and I wouldn't want to do that as I was getting hungry. The lights end as the pavement ends, but the dirt and mud paths were easy to make out in the light of the night and the lighthouse. I got back to where I started easily and got myself a bit of dinner.