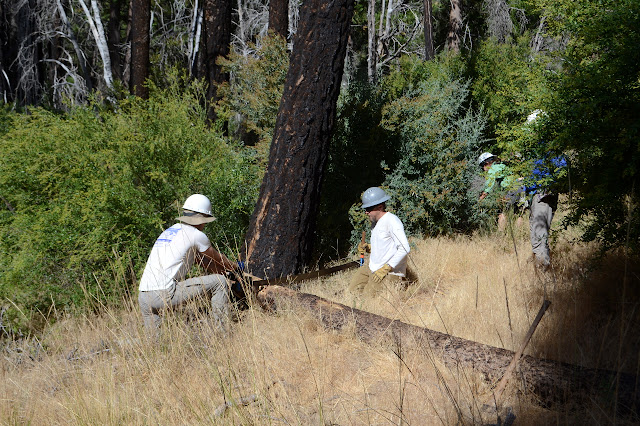 I signed up for a little more trail work, this time along the trail I bailed along when it got just a bit cold and snowed on me. At the time, I hopped over, around, and even under quite a few trees in just a few miles. Since then, there have been a lot of work to clear them all out. They said 300 trees have been cleared. Surely it was not quite so much? Then again, maybe it was. Another 20 remain and that is what we are out for today along with plenty of brushing and a little tread work. (It isn't that I have any influence. I'm just lucky to have hit the trail shortly before the work was done.) We drove the 20 miles behind the locked gate up to Bluff Camp for the night yesterday afternoon, so had a few miles drive still to get to the trailhead at Alamar Saddle. Safety talk and tool grabbing is quick with a group that mostly has been around and done this sort of thing. So we head down with a plan to make the trail nice from Upper Bear to Lower Bear. The tread above Upper Bear will have to wait.


The trail down to Upper Bear is narrow, but not that bad. It feels steeper than I recall. I was at the end of a longer day with a heavy pack then. Surely it should feel easier now that I am hitting it fresh in the morning. Maybe the urge to get down out of the wind and exposure in the freezing temperatures then was working in my favor.


There are a couple bushes in need of a trim on the way down to Upper Bear, and I go for a few just short of it, but it really is very close to the delineation between work needed and not. Beyond it, we get into areas where the big trees burned in the Zaca Fire and died and now let in the light for the little scrub. Oh, yes, and they fall.

Garnet Peak, not to be confused with Garnet Mountain, is sandwiched between the two hikes yesterday and is the rather peak looking thing in the near distance of both of them. It is the last of the Hundred Peaks Section listed peaks for this trip and has its own trail up, but approaching via the Pacific Crest Trail gives me a few PeakBagger bumps to grab on the way. Also, I suspect Penny Pines, a place where water is available, to be easier to find. It does have a sign, but it is far enough off the road to miss in the dark. The paved pullout is just south of a big orange snow gate and cattle guard, so that can provide a landmark to find it, too. There is no indication of where the water is, but two trails head off marked as PCT. I grab the north one since I want to head north from here. It is just the longer route to actually join the PCT on the other side of a low hill.


At the junction, there is a sign to indicate water is along the shorter route back. Not too far past the junction, there is an old fuel break and the first peak a short way off in roughly that direction. The down side is marked restoration area, but up is fine. I go for it, but it only goes a little way up to a little flat. Except for the beer bottles, it does not look like many people come this way. No trail has formed, but the brush is easy enough to walk through on up to the top. The PCT is following me upward about 200 feet to my right. Maybe I did not need to leave it quite so early.


The top is a nice view spot easily obtained. Nested cans next to a rock man contain a map printed off Caltopo of the local area. The back has one entry from a few months ago, so I add my name and refresh my memory of the possible approaches to the other bumps. I have seen no other cans, so suspect that this might have been an old register cleaned out by the Cedar Fire. A bit odd that it took nearly 15 years for someone to drop something new into it. 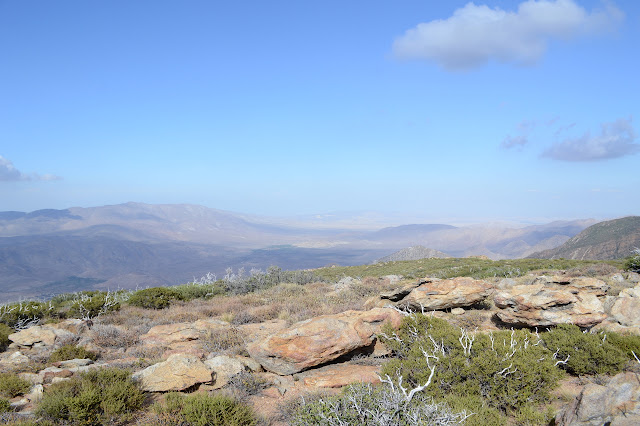 With a few hours of light left in the day, I have plenty of time for the short hike up Garnet Mountain. It is easily accessed from a sliver of land between Cleveland National Forest and Anza-Borrego Desert State Park. There are a couple folks enjoying the view at the end of the road as I start and one more coming up the old road bed that hosts the Pacific Crest Trail looking like he is chugging through a chunk of it. He is quite a picture in plastic slip on sandals, hauling an army duffel with pack straps, and cradling a gallon of water in his arms. He adds to it all a greeting of, "Beautiful country, isn't it?" with so much glee underneath it that there is no mistaking that he is really enjoying being on this trail. But it is, so there you go. I follow behind him a short way.

Soon enough, it is clear I should be climbing through the brush rather than wandering along the trail. Both slope and plants are easy enough to travel, so I just wander upward to find the end of a road. I should have just hiked up the gated road next to the trail. There is still 200 feet past the road to get to the peak, but it is even easier than the 250 feet that got me to the road, so that is no bother. That was practically a drive up. 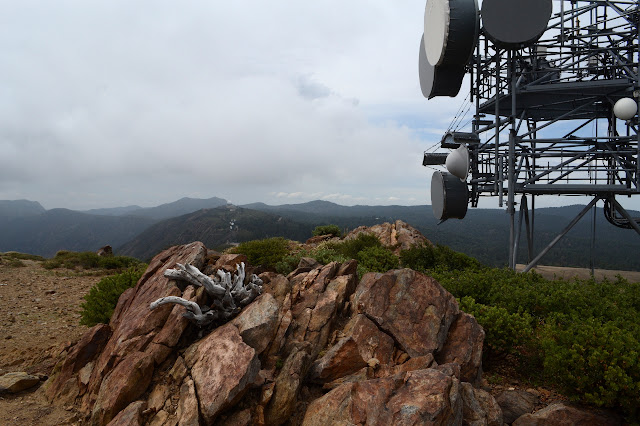 After being in San Diego for unrelated nefarious reasons that only slightly involved being a bit of a jungle gym for an enthusiastic child aged 1 year and 2 days, I headed out to the Laguna Mountain Recreation area to go after three peaks listed on the Hundred Peaks Section peak list, each very near a segment of the Pacific Crest Trail. My first target is Monument Peak. It has a few named peaks nearby and someone has marked a few of the minor bumps that just happen to have a poorly surveyed elevation on PeakBagger. Except for Stephenson Peak, they are all near to the trail and look easy enough to get to. Signage on the road is lacking, but my first guess at the right bit of parking contains interpretive signs referring to Storm Canyon, a boardwalk overlook, and steps down to connect to a well established (but unmarked) trail winding its way through the area. This is probably the right spot.


The day should be a bit cooler than it has been thanks to the remnants of something tropical moving through the area. It comes with some drawbacks. In the time it takes for a quick run back 0.2 miles to the car too actually lock it, the canyon fills with cloud taking away all views. The trail climbs up as it gets out of the canyon and I seem to get out of it as I continue. More chunks of cloud envelope me as I go, alternating views on the right of dying trees up on Laguna Mountain and views on the left dropping far down to the Anza Borrego Desert with white outs of 100 foot visibility.

The first bump along the way, at least according to my GPS, is about 5 feet off the trail and occupies the edge of a ridge where there is a gentle upward slope leading somewhere else. This is even supposed to be one of the named spots. I dutifully tag it, although I am mostly looking for any reason to perceive it as a peak. I tag a higher point that can be gotten to without ever going downward from the marked spot, too. It is also about 5 feet off the trail, so no challenge.