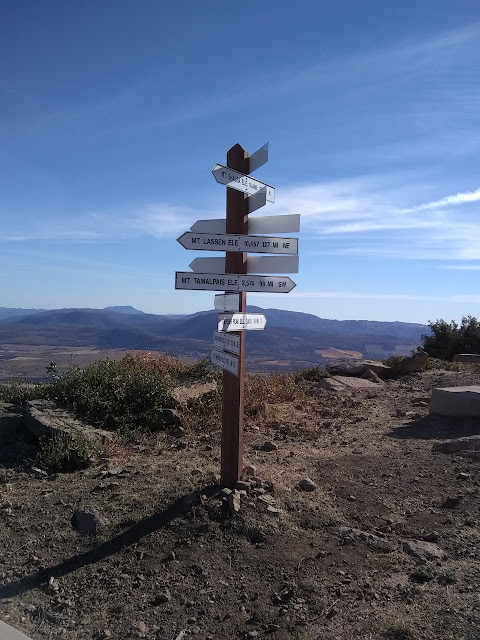 If Mount Saint Helena is special for having 1000 foot prominence, then Mount Konocti is twice as special with 2000 feet. Unfortunately, getting to the top is another road walk, but that doesn't change the view at the top. Also unfortunately, it turns out my 120V outlets in my little trailer don't run off the battery, so my camera battery is still dead and I must contend with splotchy pocket computer (for some reason known as a phone) photos. Trail parking and a picnic area are at the end of 3 miles of well graded dirt road and a map is posted just before the gate. There are a few named peaks on the mountain, but the very highest is Wright Peak, so that's what I'm going for.


The road past the gate is nicely graded too and easy walking. The one bit of trail comes quickly. It skirts around the edge of a walnut orchard rather than wandering right past the house that goes with the orchard like the road does. Some steps at the end lead back up to the road to resume the gentle upward walk along it. Views are what you make of them. There is a bit of brush and trees in the way, but breaks in this are often.


The junction to turn to Buckingham Peak instead of Wright Peak is well signed and even has a bathroom and another copy of the map that was back at the gate. They sure do like to make it easy for you in the park. A truck marked "Fire Watch" drives past, stops at the junction to determine the way, then takes off for Wright Peak too.


Along the road, I pass by another walnut orchard. This one has been let go. Most the leaves on these trees are huge and unfamiliar to me although I think walnuts are a familiar tree. However, a few among them have different leaves growing out from the lower section of root that the unfamiliar trees have been grafted to. These leaves are thin and long and paired off, looking just the way I expect walnut leaves to look. Nuts are hanging high on these trees, but it is the little leaves that make me feel confident to call these walnuts. I grab a branch of the bigger leaves to examine more closely to see that these, too, are paired off along the branch even if their size and especially shape seems all wrong to me.


The road plunges in among some tall pines and there are now no views to be found. There is a junction and I decide to take on this distraction. It is a short spur to the first homestead that was on this mountain which apparently goes with the walnut orchard. Signs about the woman who lived here join more that just tell about the general area.


It is not much further from the homestead to the peak. The forest gives way to manzanita and other low shrubs again and there are views to be had.


I get a look at the lookout from below as I climb. A sign mentions that it was manned up until 2004, but the vehicle marked "fire watch" (another one went down while I was wandering through some rocks) is here and the flag is flying, so it must be manned by volunteers now. I wander all around the peak before settling down on one picnic table to snack.

Heading down, I go up Howard Peak. It is so close by and should be easy enough. Well, not counting the last hundred feet that is rather steep and loose. It has been used as road, but there is a lower parking spot for anyone coming up to the electronics up here who has a bit of sense.

The peak baggers say there is a trimmed but overgrown route up South Peak from behind the bathroom just up the road from the homestead. The geocachers say there are caves up there, too. (Actually, there are supposed to be talus caves, some quite large, all over the mountain.) It seems not so far and tempting, but not quite tempting enough. Heading down, I am struck by how calm the lake has become. It holds a bit of reflection now.


Buckingham Peak is also tempting and a dither a bit more at it before finally deciding against. Leaving these two will surely make it more likely that I come up again for another chance at that Shasta view? Maybe. For now, I think it might be a good idea to actually get down before dark this time. The park is only open until dusk, after all.