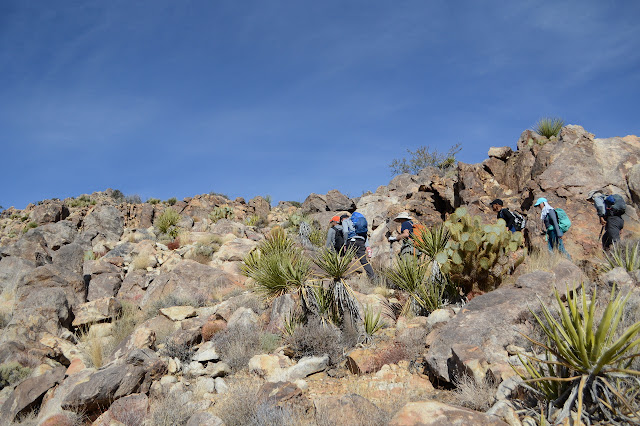 I decided to be social and signed up for some hikes going on as part of the Holiday Hooplah. This is an annual party put on by the Hundred Peaks Section of the Angeles Chapter of the Sierra Club with hikes in and around Joshua Tree National Park. I've been to a bunch already, so am running out of new peaks to climb. (For more Sierra Club outings including these past Holiday Hooplahs, click the "Sierra Club" tag.) Today, I am up for Queen Mountain and Mount Inspiration in two separate hikes. I get to save the $30 entrance fee because I can sit in a car with someone with a senior pass. First is Queen Mountain, which is going to be a little bit further than usual because the roads were closed after the recent rains. Parking is at an interpretive turnout instead of the usual small loop of dirt at the end of a road.


We cross the flat desert to the road we meant to be driving, then keep on going along it to the loop. Joshua Tree isn't the only place that got precipitation. Poking above the nearby hills, we can first see Mount San Gorgonio then Mount San Jacinto covered in white stuff. Those tall peaks probably won't be giving it up until spring.


Past the parking, there is old road (and an old complaint about having to park progressively further away from the peak) and then a rather well established bit of trail. I expect it is from prospectors, but there is nothing too obvious around the area where it runs out. When the trail runs out, there are lots of cairns to follow. There must be five or eight different opinions on where people should hike, each with trails of varying distinctness.


We stop for a rest and then have to stop shortly after for some pliers work after someone gets a little too careless next to a barrel cactus. That surprises me since I've never noticed more than the spines like long fingernails, but they've got a couple proper spikes to remove from somewhere. There could be another cactus hiding nearby that is the actual culprit. There's a lot of cactus. Once we're moving properly again, we're getting into some bigger rocks but more stable lands.


It is one of those climbs that enthusiastically suggests you're almost to the top only to show off a lot more climbing to go but isn't long enough to make that an annoyance. Or maybe it's the company and I'm not too worried about where in the hike I am at any moment. More? That's alright. Keep it coming.

There's a little direction from the back to be sure we get to go up "the slabs" instead of something less interesting. Now it really is the last bit before the top.

Someone goes after the benchmark, but it is a single arrow pointing in an unexpected direction. It's the azimuth! The other peak has the benchmark. Admittedly, it does look like it might just be a little lower. We were supposed to be looking for the register, or course, and were giving the search for it some minor attention. Not enough since when someone comes up properly looking it is found quickly.

After something approaching an appropriate interval, we head down to the saddle between the peaks again. This time, some of the slabs are missed. In spite of the suggestion of the azimuth mark, we don't get to go tag the other peak, less than 200 feet more climbing. We just get to go down. We seem to follow the cairns a little more randomly now, but eventually we're looking at our own footprints going the other way again.

Unfortunately, with the extra miles, as flat as they are, we now don't have quite enough time to do Mount Inspiration before dark. It is decided that it is more important to give people a chance to get camp set up in the light than to go for this little bump. I thought I'd have all the Joshua Tree National Park peaks on the Hundred Peaks list checked off before the end of the weekend, but that puts an end to that.