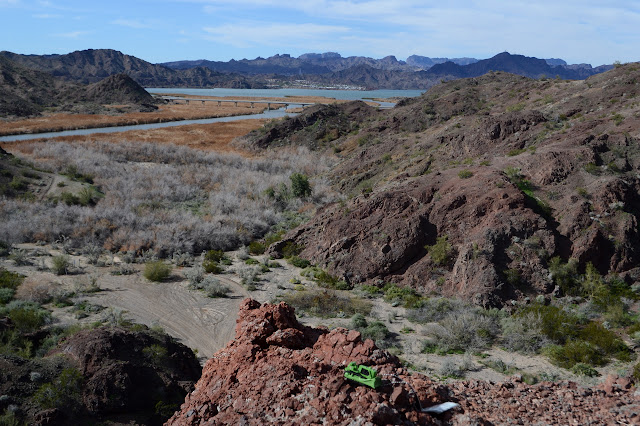 I stopped at the view point beside the highway to hike out a short way to sign a cache, but it is really an excuse to see a bit of the Bill Williams River. It has probably changed a bit with the damming of the Colorado River that makes Lake Havasu. That dam is only a little further down the river and so this one has been flooded a bit too. Outside the channel seems to have filled in so that now reeds grow thick. Around the edge is a border of tamarisk. There are not too many birds in evidence at the moment. I quite like the mountains rising from it.


The geocache I am going after is actually 0.56 miles off. Not very far, but it is across a few narrow, steep sided canyons. The direct route would be difficult to actually hike. The reeds look flat and easy, but in spite of their brown color I am rather certain that there is probably water or at least miserable mud down there and the tamarisk around the side are large, well established, and thick creating a difficult barrier. My plan is to follow the ridges, smoothly up one part and down another. They don't look too bad. But I seem to need to prove to myself that the direct route would be difficult and end up scrambling down one side and up the other of a very small canyon. It involves a jump down and a crawl up a crumbled water course. Up close, the tamarisk look particularly impenetrable.


So up the ridge I go, quickly picking up trails left by whatever animals can be found here again. They are also quite partial to following the ridge lines and I suspect they know something. So I go up and up. It is pretty easy, but I am still 0.51 miles away after 0.75 miles walked, so quite a bit longer.

Even with the much longer distance, it is soon time to figure out my way down. I pick a ridge and a wash on the map and try to follow it down. There are a few splits and it takes a little backtracking to get to the one I chose and the trails seem to be choosing something different. They come and go, though, so I could just be in a hard spot. The wash area I am headed for has a road down it, so is quite wide. I can't help but notice how very far down it seems as I approach and how very steep things need to get to drop that far so quickly. The ends of the ridges do seem quite steep. I should probably go down a wash although they too can come to uncomfortable drop offs.

The map suggests one wash as quite nice, but it really isn't. I scamper back up and try something that seems to have a trail. It was probably just water course, but the steep bit like a waterfall is not quite too steep and the rocks hold for a pretty easy down climb.


My ultimate destination is up the other side to one of the many small caves along the edge. It is not my first desire to go up the other side after clambering down the one, but going up is easier in that slipping is less likely. Getting down again is also easier since I have actually surveyed it from the bottom and can be certain I am following a suitable route.


Back down on the road, my thought is to take the really easy way out: the road. That doesn't last long. The road is sandy and loosened by the tires and generally not a pleasant walk. The middle of my hike could definitely be called a pleasant walk. There is a wide wash to my left and I go down it. It is actually wide enough for the vehicles, but they have not bothered to try it out much. Soon I see why. It becomes narrow with a little waterfall they can't pass. For me, it is easy. I just follow the game trail up the left side. A second one comes along but there is a nice game trail around it too.


As I get close to my path in, I am pretty certain this wash was near the aborted ridge path I started down at one point. It seems about time to get up on one of the ridges and I find myself on that aborted path as things become familiar. It did have a really good trail on it. There had to be a reason. It was a much nicer bit of travel. So finding a wash that gets most the way up as far as I want to go seems a usable technique for deciding on a route for now. I have a couple choices for getting back. One is that first wash I got down into at the start. There was a jump to get down the last bit, so that isn't attractive. Then there's a larger one that gets to the highway a bit north of my parking. First, I get to enjoy the middle bit high on the ridges a little bit again.


Getting down into the first possible wash is a bit of a scramble. The animals went right and I went left. I really should just follow the animals even if it is not what I picked on the map. They picked looking at what is really there instead of 40 foot contours of roughly what is there. My scramble puts me down a few feet from where water is oozing from the ground. The spring is unmarked, but I had heard and seen water in the canyon when I first got to it, so it stands to reason there would be one somewhere up it.


Walking along the canyon looks like a good way to get my feet wet which is never something I care to do. I scamper up the other side as soon as I can aiming at that other, larger wash.

There is a thought of just staying high, but ridges do tend to be cut off into cliffs by highway builders. I do need to get down to that highway somewhere to get back to the car. Finding a feeder wash into the big wash to follow is easy and travel along both is just about as easy as it gets.


Getting back out of the wash once at the highway is a bit harder. I pick a side and go for it. No cliffs, but a fair bit of trash to avoid. It is not all that far back and I have space to hike it along the side, usually further than just the shoulder. There are still things to ponder about what will produce a nice cross country route. I'm not sure that nearly 6 miles to get out and back just over half a mile is quite optimal.